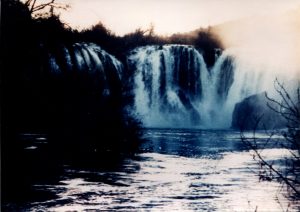 I have always felt called to share this waterfall photo widely, but the time was never right. Now it is.  Before I tell the story, it is probably best for you to look at the photo. Here it is in a 3-slide progression. The first slide is the original 1991 image completely untouched. Recently, that original photo was scanned and images of the Blessed Mother can now be superimposed over the waterfall to help draw attention the amazingly similar image in the original. (Note: Displays MUCH better on a larger screen) 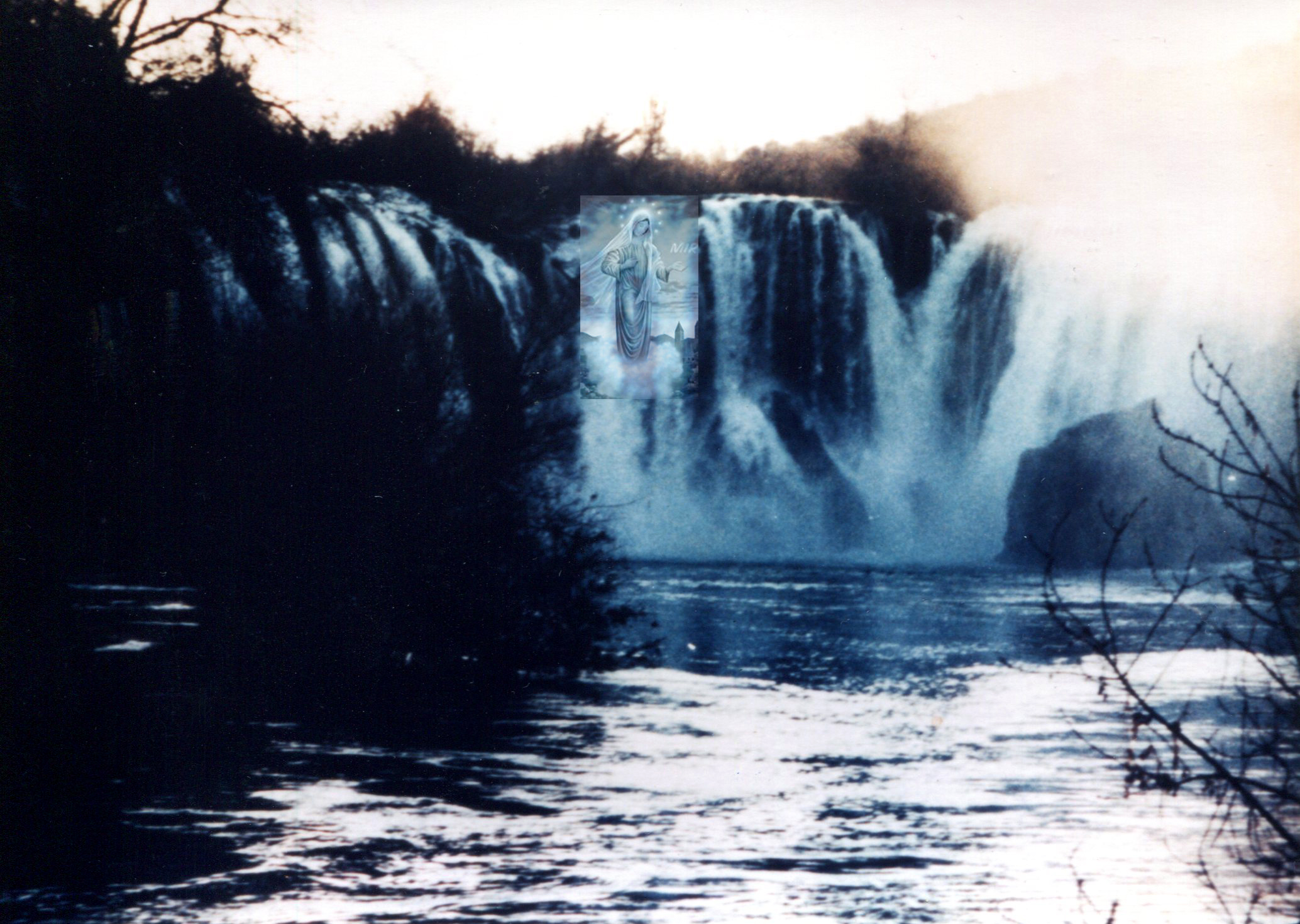 This picture literally helped save my faith when I was a young man. Today, nobody knows exactly where the original negative is. It’s probably in a drawer somewhere at my parents’ house. Over the years there have been so many copies made that today all we have are copies of copies. In a digital world, that would not be a problem. But this photo was taken 25 years ago with film. Making copies of copies has lead to a more blurry image. Nevertheless, it’s the best we have to work with.

In the late 1980s and early ’90s, while I was studying at the University of Notre Dame, my Dad and Mom went on a series of pilgrimages to a holy site that had a waterfall nearby. These pilgrimages had a dramatic effect on them and  most everyone in our large Catholic family. Most people who read this story will not know me or my family personally. To understand the story, it’s helpful to know a little bit about us. Mom and Dad had 12 children of their own, then lost #13 during pregnancy. So how did they respond? They went and signed up to provide foster care whenever Catholic Charities needed to place a newborn for a month or two. After about a dozen such placements, one of these babies remained with our family for two years while a court decided his fate. When the court ruled that the little boy could be adopted, Mom and Dad defied convention and adopted him themselves. This was an unpopular move with some people because my new sibling in our 100% Polish family was black. There is no sense in naming names and rehashing unpleasant details. Let’s just say that this did not go over very well with everyone. But Mom and Dad never flinched. At least they never flinched in front of us. That is how this adorable little boy, Johnny, became my 12th sibling.

He was brought into a family home brimming with love and faith and goodness. It was often chaotic, but mostly controlled chaos. Mom was always busy taking care of the kids and the house. If she ever got involved in anything else, it was usually the Right to Life movement and perhaps lending a hand to a neighbor in need. Dad was active in the Knights of Columbus and served on school boards and parish or diocesan councils. We often prayed the family rosary during Lent, but it really became a primary focus of our family after Mom and Dad started taking pilgrimages to the site of an alleged apparition of the Blessed Mother. That’s when the tenor of the house became dramatically more religious. Instead of just during Lent, we began to pray it every night.

I have to admit that I didn’t always enjoy this commitment to pray the rosary. Regardless of it’s inconvenience, Mom and Dad stood firm. If we had friends over to the house they had two choices: either join us or wait for us in another room. This made us kids feel awkward, but it also taught us a lesson about priorities and commitment. Those family rosaries blessed our family in a way that is hard to overstate. For now, let’s just say that these pilgrimages, the resulting family rosaries, and the above photo took our family’s spiritual life to another level.

In January of 1991, Dad took my sister Lisa and some of her friends on this pilgrimage. While the group was elsewhere, Dad went with a friend named Mario to a beautiful waterfall nearby to go fishing. They didn’t catch anything. It was, however, a serene and comforting setting that brought my Dad peace. When it was time to leave, Dad stood on a tree that had fallen into the river and took one picture to capture the moment – and that was that.

Three months later, Lisa was in her bedroom looking through the stack of photos and she noticed something stunning. She brought the photo downstairs to show Dad and the rest of the family. In subsequent days, it set off quite an impressive series of incidents where people looked at the photo and felt a call to renew their faith. What everyone saw still impresses me to this day: the image of the Blessed Mother highlighted above. It is obviously an image formed simply by the water. But how? How could water “know” to form an image of Our Lady at the precise moment that my dad took that photo? How could the water molecules just “happen” to form the same image of Our Lady that had brought so many pilgrims to that place?

Remember, this is 1991 in the days well before photo-shopping technology. Photos were taken on film, not digitally. As was the custom in those days, the film was dropped off at a local drug store to be developed and they came back in a large batch. It took a long time for people to come to the house to look at them.

As amazement spread, Dad made copies to give to people. Hundreds, if not thousands of people ended up scrutinizing it. As more and more people looked, they found some other images. For instance, a great many people see the image of an angel in the traditional pose of crowning the Blessed Mother as queen. (For my non-Catholic Christian friends who may raise an eyebrow here, here is a Catholic explanation of Mary’s queenship.) In the slide show below, I have interspersed the waterfall photo with some traditional depictions of angels crowning Mary, a relatively common theme in Catholic art.

It would be hard to exaggerate the effect that this photo has had on many many people both inside my own circle of family and friends and outside of it.

Here’s just one small story to illustrate the effect. Back in the early ’90s, I was friends with two young men from Panama named Carlos and Ernesto who were living at Moreau Seminary and studying at Notre Dame. Their sponsor and mentor was

Archbishop Marcos McGrath, CSC, the Archbishop of Panama and a Holy Cross priest. Although they were not seminarians, they lived in the seminary and participated in its community life. Carlos and Ernesto were periodic visitors to my parents’ house in Elkhart, Indiana. Both were impressed and touched by the photo. When Dad gave Ernesto a 5″x7″ copy, Ernesto asked if he could have another one to give to Archbishop McGrath. When Ernesto returned from Panama after his visit, he returned to see my dad and carried with him a request from the archbishop for a larger version of the photo. Apparently, Archbishop McGrath was so touched by it that he wanted a larger photo to frame and display for his own private devotion!

A couple years later, when I hit a time of great darkness and skepticism in my own spiritual life, I can remember turning to this photograph many times thinking, “There is just no possible way that the water formed these images by coincidence.” Just too absurd to believe! By this time, I already understood the logical proofs of the existence of God. I understood how even science studying the created world made the probability of God highly likely. But despite the mountains of evidence I had already seen, I was still somehow unsure whether God was a personal God. I had also encountered some sophisticated Catholics who thought praying the rosary was silly. Those of us who did were questioned and mildly ridiculed even by some of the thought leaders of a seminary. As I began to question this practice myself, I also began to question the very reality and existence of a personal God.

This waterfall photo helped me to have faith. Like an icon or religious piece of art, I turned to it over and over again in times of struggle and doubt. Through it, the Blessed Mother seemed to whisper into my soul, “Do whatever He (Jesus) tells you!” I didn’t hear this with my ears, but it also was not merely a thought. I heard it! Whenever I doubted this I would listen to other people’s stories about how much this photo had re-energized their own faith and these testimonies helped to strengthen mine.

Over the years, I have seen only good fruit come from this “tree.” Lots of people acknowledge that it led to a renewed prayer life, a return to the Sacraments of the Church, and an attitude of seeking to help others. Many of these people today share a deep devotion to the Holy Eucharist.

Finally, one of the most obvious but ambiguous images is what some of my family and friends call “the silent scream.” I think it looks very much like Edvard Munch’s “The Scream.” Take a look:

Okay, that’s enough for now. If you see the images and like the photo and the message behind them help you, then great. If you do not see anything but water, then no problem. Our faith is based on a lot more than images in a photograph. They are not necessary.

But I certainly find them helpful sometimes.

The Waterfall Picture Many Consider Miraculous 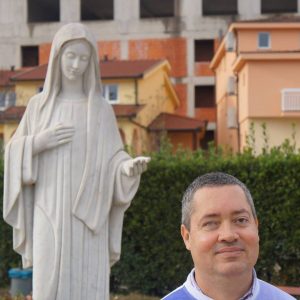